Seabird conservation is a major focus around the world; learn about some recent efforts, and offshoots of others, below:

How we recruited albatrosses to patrol the high seas for illegal fishers:

Sitting Ducks: Why Millions of Arctic Seabirds Are in Danger

The Northern Bobwhite (Colinus virginianus) continues its population decline across its geographic range.

"In 2007, the National Audubon Society (BirdLife in the US) published the results of the first-ever analysis of combined annual sighting data from the two major censuses of bird populations in North America—the Christmas Bird Count (CBC) and the Breeding Bird Survey (BBS) (Butcher and Niven 2007, Butcher 2007). The analysis highlighted the plight of 20 common bird species, all of which have lost over half of their continental population since 1967. Common birds are defined here as species with a global population of over 500,000 and with a range of one million square kilometres or more."

"Northern Bobwhite Colinus virginianus has declined the most dramatically, with population reductions of 82% occurring over the past 40 years. Consequently this species has been uplisted from the Least Concern category to Near Threatened on the IUCN Red List (BirdLife International 2008)."

There are many regional and state-level bobwhite conservation initiatives:

"Wildlife biologists know more about the biology, life history, habitat requirements, and management of the northern bobwhite quail than probably any other species in North America. Yet bobwhites, and the suite of wildlife that claims the same habitat, have been declining virtually range-wide for at least 40 years, approaching extirpation in some regions and states."

ABSTRACT: Natural sounds, and bird song in particular, play a key role in building and maintaining our connection with nature, but widespread declines in bird populations mean that the acoustic properties of natural soundscapes may be changing. Using data-driven reconstructions of soundscapes in lieu of historical recordings, here we quantify changes in soundscape characteristics at more than 200,000 sites across North America and Europe. We integrate citizen science bird monitoring data with recordings of individual species to reveal a pervasive loss of acoustic diversity and intensity of soundscapes across both continents over the past 25 years, driven by changes in species richness and abundance. These results suggest that one of the fundamental pathways through which humans engage with nature is in chronic decline, with potentially widespread implications for human health and well-being.

Time to watch for, and count raptors

The next 3 months are the time to watch the skies for migrating raptors. Depending on where you live, there's probably a good raptor watch location not far away. 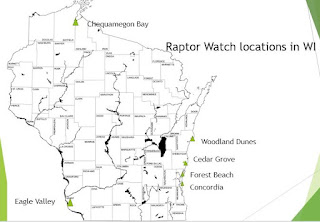 There are a number of well-known locations in Wisconsin where raptors have been known to concentrate during migration, with long-term data still being collected at most of them. See the map reproduced here at left, for approximate locations in eastern, western, and northern Wisconsin.

September and October are peak months for Sharp-shinned and Cooper's Hawks, Merlin, Northern Harrier, Red-tailed, Red-shouldered, and Broad-winged Hawks. Bald Eagles, American Kestrels, and Turkey Vultures are also fairly numerous, with Peregrine Falcons, Northern Goshawks less so. On the Lake Michigan shoreline sites, the best days are those with west and northwest winds.

More recent news on shorebirds and their populations 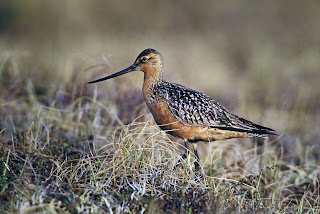 more on the status of shorebird populations 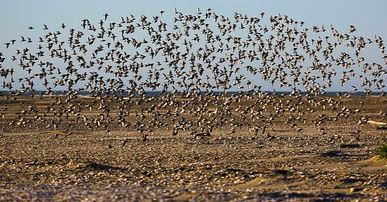 Learn about the current status of shorebird populations, at: https://whsrn.org/about-shorebirds/shorebird-status/ "Their numbers are dropping quickly. Shorebirds are among a few groups of birds showing the most dramatic declines." Read about the Arctic Shorebird Population Model: https://www.usgs.gov/software/arctic-shorebird-population-model Learn more at the SHOREBIRD Conservation Society: https://www.shorebirdconservation.org/ Also, see the Coalitions for Shorebird Conservation: https://www.manomet.org/project/coalitions-for-shorebird-conservation/
Posted by Bill Mueller at 7:32 PM 0 comments 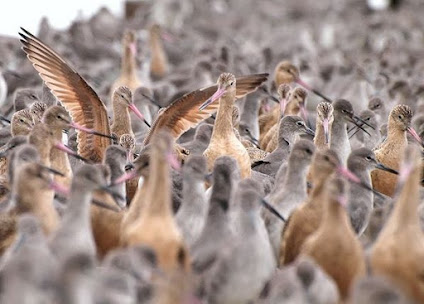 World Shorebird Day is September 6th this year. It is important to participate in this global event. Learn more at https://www.worldshorebirdsday.org/global-shorebird-counts

"The Global Shorebird Counts, held every year around World Shorebirds Day (6 September), is one of the key events of World Shorebirds Day. This program demonstrates the importance of fieldwork, supports observers in improving counting skills, contributes to the increase of the number of birdwatchers and scientists monitoring shorebirds worldwide and pledges new citizen scientists to the world’s largest bird database program."

Learn about the international work of Waderquest,in a recent newsletter, at:
https://www.waderquest.net/wp-content/uploads/2021/04/Apr-2021-newsletterR.pdf
Recent articles on the global declines of shorebirds are linked here: